First and foremost, happy birthday! It has been a rollercoaster of a year since meeting you and I’m so thankful that I did in Switzerland. As some of you may already know, Flora was my next-door neighbour at Bülachhof. Although we didn’t travel together, I’d often drop by for food, beer, and general good vibes. In the summer, we both returned for another month and it was a tumultuous time of exam-induced bonding. From bridge jumping to concert going, Flora has been there for some of the most memorable moments of my time abroad.

I got to know Flora through my travel mate Brandon and later through Alex and Zach when they “cried” over computer science courses at ETH. Honestly, they’re all too smart to be crying over machine learning and whatnot. I’m convinced that they were trying to normalize my intense stress over neurobiology.

Swiss concert stadiums are the epitome of Swiss cleanliness and efficiency.

I had to post this one because Flora was significantly cooler in every other photo.

The caption says it all!

Other than her academic rapport, which can be demonstrated by her golden track record at University of Toronto, Flora and I bonded over music. She told me a story about her adventures in Hungary, which resulted in purchasing a cello for a foreign seller and bringing it all the way back home. Not to mention the conspicuous keyboard that miraculously appeared in her flat over the holidays. However, it was our impulse concert ticket buying that sealed the deal. Bruno Mars at Hallenstadion will forever be engrained in my mind. She had messaged me late-March, with a proposition that I couldn’t refuse. I’m so glad that she had invited me to join on this little musical adventure because it perhaps was the most fun I had all semester. Like many concerts, it was exciting and carefree. The Swiss have a knack for streamlining every procedure, so it was also the least stressful concert I’ve ever attended (i.e., transportation, coat check, food, mosh pit, home). It was during this time that I got to see Flora flourish. I can 100% relate to her introverted nature, but each time music comes into play, she blossoms into her true colours. An absolute honour to see such a genuine person showcase their passion for something that they love.

Views of the Limmat.

Another aspect of showing your true colours is through adrenaline. What better way to feel the rush than by jumping off a bridge? It was adorable to see our group gradually increase in height in which we dived off the platform. Flora in particular came a little later in the day, taking a much-needed break from her studying. She had wanted to test out her new swimming skills in the Limmat. With each jump, we laughed even harder as we hit the rushing water below. The current would push us along, but that didn’t stop Flora and I from trying to swim against it. Flora is super athletic, with martial arts, tennis, snowboarding, and basketball under her (black) belt. The effort was for naught, but the experience was nostalgic. This was also when I realized that this girl could hold her own. I won’t mention in what regard for employability-sake, but definite respect across the board.

After returning from Zürich, we remained friends. She’s always updating me on concerts (Son Lux and Hyukoh, to be exact), which has done wonders to my personal playlist. I guess excellent friends have excellent taste in music. I’m so glad that she has been a positive influence in my life and I hope that I have been as well. So cheers, Flora, to more music and adventures in the future. I know it is bright.

Just getting off the train at Zürich HB and waiting for Tram 10/14.

Exactly one year ago, I landed in Zürich, Switzerland. And the first person that I met was my flatmate Kohei! If you read my first post on this blog, you’d know that I arrived early in the morning. Around 7:00, I tentatively pressed the doorbell of Bülachhof 12 and waited in the cool February chill. A bleary-eyed student eventually emerged from behind one of the locked doors and graciously let me in. With formal introductions aside, I immediately took a liking to my roommate. It turns out that he had visited Canada before and even attended Waterloo for a short while. Obviously his physics skills were world-renowned. However, it was his kindness and helpfulness that stood out. He had already been on exchange for a semester prior to my arrival. He learned the ropes, so to speak, and passed on his local knowledge. I’d say, without him, I’d probably still be a bumbling fool trying to find the tram stop in Switzerland.

After guiding me through the transportation, insurance, and academic sphere of my exchange, Kohei and I often caught up in casual conversations in the hallway. He ran on a very different schedule than me and we only crossed paths between classes or late in the evening. It was always nice hearing about his experiences in the land of chocolates and mountains, but also his home in Japan. Later on during our exchange, the rest of our building learned that Kohei is actually quite a bit younger than the rest of us. Only to prove that he really is the smartest of us all.

Other than being a good friend and mentor, Kohei is a great cook. I never had a chance to eat his dishes, but I’ve heard great things from his group of friends. Since he already had a stockpile of Asian sauces and spices, he’d often let the rest of us roommates use some for our own meals. Just a little taste of home, I guess. Whenever he was in the kitchen, the flat automatically filled with mouth-watering aromas. Already inviting myself over Chez Kohei for next meal.

It’s really a shame that I didn’t get to hang out with him outside of the flat. In those hallway conversations, I know that Kohei worked hard academically and didn’t get to travel as much. We talked about Granada, Spain as an option over the break, but I eventually left for Italy and he had research papers to write. Once the school semester ended in late spring, I was adamant in getting him out of the flat. On a hot summer-like day, I finally convinced him to join me by the lake for a quick swim. Even though the iPhone 7+ is advertised to be waterproof, I was still scared of dropping my phone, hence the less-than-perfect photos. This also means that, HI KOHEI, COME VISIT SOON!

He finally found some time to relax with his clueless roommate!

Now that I’ve thoroughly embarrassed him through this post, I just want to say a quick thank you again for helping me out through those four/five months in Zürich. It was such a pleasure getting to know you and your crazy theoretical quantum physics mathematics (honestly, I’m still not sure what you study). I’m sure we’ll cross paths in the future, either for your academic endeavours or my travel plans spanning into Japan. Until then, you know where to find me!

Relaxing on Zürichsee with Kohei!

Looking up to a brighter future, or at least exam season.

I should be writing about Rheinfall, Paris, and Reims, but instead, I’m here sipping white-hot chocolate on what feels like the coldest day of the year in Toronto. 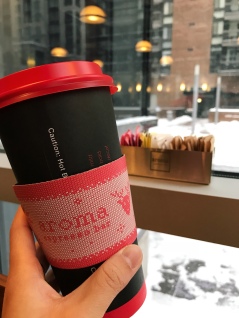 Shoutout to Aroma Espresso Bar for providing refuge during this snowstorm while I run errands in the city. 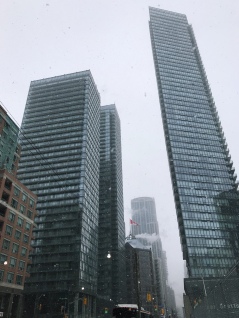 Just 24 hours after the coldest day does Toronto decide a snowstorm is appropriate during the holiday season.

Similar to the interlude during the impromptu Thanksgiving post, this will just be a quick recollection during the season. It is absolutely hectic between the festive obligations, but I’d like to say a few words about this year before we turnover to the next.

During Christmas, I have a tradition of sending all of my friends and family a short message, just wishing them a happy holiday and saying hi to their parents for me. Usually, I get a short message reply and we repeat the cycle again the next year. It’s a nice touch base. However, this year, I also sent the same messages to my friends overseas. Instead of the typical three-worded replies I get from Canadian friends, my pen pals in Argentina, Australia, Austria, Belgium, England, France, Germany, India, Italy, Japan, Korea, Mexico, Netherlands, Norway, Sweden, and Switzerland all wrote letter-like summaries of what they’ve done thus far since the end of exchange. It was nice catching up, even through a couple textual exchanges or a fleeting phone call. I’m sure it’s just the post-exchange depression talking, but I really miss them. We’re always planning to visit each other’s home countries, but with this kind of snow, I don’t think airplanes can leave or enter Toronto any time soon. Not to say that my Canadian friends are unfriendly, far from it! Canadians are the nicest people out there. Perhaps it’s because of the lack of physical distance that we assume immediate contact, thus prolonged updates are unnecessary. Regardless, it was nice hearing from everyone!

If you didn’t get a personal message from me, it’s probably because I don’t have your personal number! I guess it’s also a testament on whether we’re close enough to share that kind of information. Or whether there’s literally an ocean between us?

Wishing everyone who follows along a warm and blissful holiday. See you in the new year with new content on my Grand Italian Adventures and The Four Day Four Country Challenge!